​For the lucky individuals born in March, two birthstones are associated with this early spring month: aquamarine and bloodstone.Both stones are very different from one another in appearance, but each share a similar symbolism of preserving or enhancing the health of the wearer.
​

This gemstone was believed to protect sailors, as well as to guarantee a safe voyage. The serene blue or blue-green color of aquamarine is said to cool the temper, allowing the wearer to remain calm and levelheaded.
In the Middle Ages, many believed that the simple act of wearing aquamarine was a literal antidote to poisoning. The Romans believed that if you carved a frog into a piece of aquamarine jewelry, it would help to reconcile differences between enemies and make new friends.
Still, other historical groups took this lore even further, using aquamarine as gifts to the bride at a wedding in order to symbolize long unity and love. Some even believed it could re-awaken love between two people.

The Sumerians, Egyptians, and Hebrews all admired aquamarine, and many warriors would wear it into battle to bring about victory. Many ancient medicines used powder from aquamarine to help cure all manner of infection, but it was said to be particularly good for eye ailments.
The stone is also considered to be a great addition to mental health and is used widely as a symbol in Tarot as well as a meditation aid and is said to help one cultivate more inner tranquility. It is also considered by some to be a great aligner of the spiritual and the physical, for those who feel out of harmony or alignment with oneself.
No matter how you use aquamarine—either as a piece of jewelry or as an aid in a spiritual journey—its cool, tranquil color is the perfect complement to any skin tone or setting.
​ 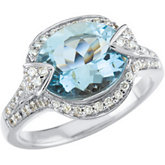 This ancient stone was used by the Babylonians to make seals and amulets and was believed to have healing powers — especially for blood disorders. It is sometimes called the martyr's stone as legend tells that it was created when drops of Christ's blood stained some jasper at the foot of the cross.
Many other ancient cultures believed bloodstone had magical powers, with some references to its ability to heal dating back to 5000 BC.
The Babylonians used bloodstone in their divination. The Egyptians prized bloodstone because they believed it helped them to magically defeat their enemies. They also believed it increased their strength or made them invisible.
Still others believed that bloodstone could help control or change the weather, win legal battles, or give the gift of prophecy. It was so loved for its properties, many used the stone in jewelry, signet rings and even small cups or statues.
Today, many still cherish bloodstone as a lucky charm or amulet and is prized by athletes or those who wish to increase their personal strength. Some believe it helps with mental clarity or increasing creativity or even boosting overall energy.
No matter how you use or wear bloodstone, it’s a unique stone great for everyday use when you want to look good or even feel good. 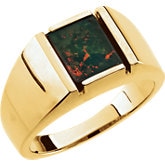