​Individuals born in November can choose between two sunny gemstones to brighten up this chilly month. November’s birthstones, topaz and citrine, are both known for their calming energies, bringing warmth and fortune to those who wear them.Topaz and citrine look so similar, in fact, that they’ve often been mistaken for one another throughout history. They are actually unrelated minerals, and topaz occurs in a wide spectrum of colors far beyond yellow.
Both of November’s birthstones are fairly abundant and affordably priced, even in large sizes, which means everyone can find a way to fit topaz and citrine into their budget.

​Yellow gems have been called variations of the name topaz for thousands of years – long before mineralogists determined that topaz occurs in a range of colors, and that many yellowish stones actually belong to other mineral species.
Ancient texts from the Greek scholar Pliny to the King James Bible referenced topaz, but because of this longstanding confusion, they likely referred to other yellow stones instead.
During the Renaissance in Europe, people believed that topaz could break spells and quell anger. Hindus deemed topaz sacred, believing that a pendant could bring wisdom and longevity to one’s life. African shamans also treated the stone as sacred, using it in their healing rituals.
Russia’s Ural Mountains became a leading source of topaz in the 19th century. The prized pinkish orange gemstone mined there was named Imperial topaz to honor the Russian czar, and only royals were allowed to own it.
Since the discovery of large topaz deposits in Brazil in the mid-19th century, topaz has become much more affordable and widely available.
Processes were developed in the 1960s to turn common colorless topaz blue with irradiation treatment. This variety has since flooded the market, making it one of the least expensive gems available.
Light blue varieties of topaz can be found in Texas, though not commercially mined there. Blue topaz became an official gemstone of Texas in 1969—the same year Utah adopted topaz as its state gemstone. 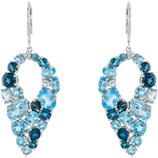 Citrine quartz has been adored since ancient times. The name citrine was used to refer to yellow gems as early as 1385, when the word was first recorded in English. However, since the gem’s color closely resembled topaz, these two November birthstones shared a history of mistaken identities.
Quartz and topaz are actually unrelated mineral species. But before these differences were clear, many cultures called citrine (the yellow variety of quartz) by other names like gold topaz, Madeira or Spanish topaz—contributing to the confusion.
Throughout history, people believed that citrine carried the same powers as topaz, including the ability to calm tempers, soothe anger and manifest desires, especially prosperity. To leverage these powers, Egyptians used citrine gems as talismans, the ancient Greeks carved iconic images into them, and Roman priests fashioned them into rings.
A key discovery gave citrine a boost of popularity in the mid-18th century. Mineralogists realized that amethyst and smoky quartz could be heat treated to produce lemony and golden honey hues of citrine, contributing to an abundance of affordable enhanced gems on the market.
Once citrine was distinguished from topaz, it quickly became popular in women’s jewelry as well as men’s cufflinks and rings. Today, it remains one of the most affordable and frequently purchased yellow gemstones. 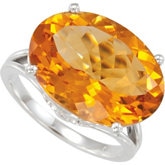