​For those fortunate to be born in April, the most prized gemstone of all is their birthstone. For this month, diamonds truly are a girl’s (or a boy’s) best friend.

Diamonds have been admired for centuries, and some historians estimate it was traded as early as 4 BC. One of the reasons it is so admired and valued is because of the process by which a diamond must be formed well below the earth’s crust, then forced upward until it is uncovered.
But before this process was understood, many ancient civilizations believed that diamonds were lighting made real on earth. Perhaps this is the reason that diamonds have often been associated with great healing powers. Many thought the diamond could cure brain disease, alleviate pituitary gland disorders and draw toxins from the blood.
Historically,the diamond first became a popular gemstone in India, when the Moghuls and Imperial Colony easily mined diamonds from deposits along three major rivers. Today, the diamond is most widely known as the stone to give as part of an engagement ring.Throughout history, however, the diamond has nearly always symbolized eternal and lasting love. So whether you’re getting engaged, or simply want to give yourself a truly meaningful gift, the diamond has both beauty and enduring symbolism. 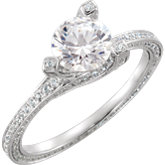