For babies born in January, the garnet is the perfect gem to represent their birthstone. This beautiful stone, which is most commonly red but can be found in a range of other colors, symbolizes peace, prosperity and good health. Some say it even has the power to give the wearer eternal happiness, health and wealth.
We say it’s the perfect way to start each year! Learn more about the January birthstone,

​The garnet is so durable, remnants of garnet jewelry can be found as far back as the Bronze Age. Other references go back to 3100 BC when the Egyptians used garnet as inlays in their jewelry and carvings. The Egyptians even said it was the symbol of life. The garnet was very popular with the Romans in the 3rd and 4th Century.
Supreme JewelryThis gemstone was also used as a talisman for protection both by warriors going into battle and to those who wanted to ward off pestilence and plague. Some ancient healers and wise men even placed garnets in wounds and praised its healing powers.
Garnet jewelry has been a fixture throughout the ages. Garnets were often used as signet rings in ancient Rome, and the nobility favored garnets in the Middle Ages.
The Victorians made garnets very popular during that time period. Some of the loveliest garnet jewelry from that era mimics its pomegranate namesake, with clusters of tiny red gems forming a larger statement piece.
Parlé GemsToday, the garnet can be found in a range of jewelry pieces and styles, from beautiful rings to stunning tiaras. Since the garnet can come in a range of colors, rare garnets in green or blue make breathtaking pieces, especially in pendants or drop earrings. 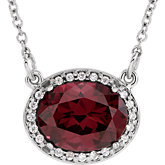