​Individuals born in October get to choose between two birthstones—tourmaline and opal. Each gem then unveils nearly limitless possibilities, as each one comes in a rainbow of shades and color combinations.In fact, both of October’s birthstones came to earth through a journey involving rainbows, according to legend.
Between tourmaline (whose color depends on trace elements in its chemical makeup) and opal (which diffracts light to show a play of multiple colors), October’s birthstones offer a full spectrum of gems to suit anyone’s personal tastes.

According to Arabic legend, opals fell from the sky in bolts of lightning. Australian aborigines, meanwhile, believed that the creator came to earth on a rainbow, leaving these colorful stones where his feet touched the ground.
In 75 AD, the Roman scholar Pliny compared opals to volcanoes and vibrant paintings, noting that their dancing “play” of color could simulate shades of any gems.
During the Middle Ages, people believed that the opal possessed the powers of each gemstone whose color appeared in its sheen, making it a very lucky stone.
But Sir Walter Scott’s 1829 book, “Anne of Geierstein,” transformed opal’s lucky perception. The story featured an enchanted princess who wore an opal that changed colors with her moods. A few drops of holy water extinguished the stone’s magic fire, though, and the woman soon died.
People began associating opals with bad luck. Within a year after publication of Scott’s book, opal sales in Europe fell by 50 percent.
​Discoveries of opal deposits in Australia revived opal’s image after 1850. The outback began producing 95 percent of the world’s supply, and many of its finest opals.
The world’s largest and most valuable opal, “Olympic Australis,” came from Coober Pedy, Australia in 1956, during the Olympic Games in Melbourne. Valued at $2.5 million in 2005, this gem measures 11 inches long and weighs 17,000 carats (7.6 pounds).
After scientists discovered the spherical silica structure of opal in the 1960s, they figured out how to synthesize it in 1974.
Since then, opal has gained more popularity through recent discoveries in Ethiopia. Material mined in the Shewa Province in 1994 wasn’t desirable because it was dark and tended to crack easily. But deposits in the Wollo Province, discovered in 2008, brought vivid play-of-color displays to the market.
Australia’s depleting supplies of classic opal impact the price of this uniquely kaleidoscopic gem. Because its flashing play-of-color can suit many changing moods and tastes, the opal stays in high demand. 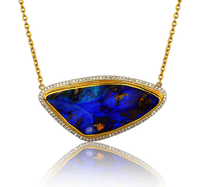 Egyptian legend tells that tourmaline found its famed array of colors when, on its journey up from the earth’s center, it passed through a rainbow. Because of its colorful occurrences, tourmaline has been confused with other gems throughout history.
In the 1500s, a Spanish conquistador found green tourmaline in Brazil—which he mistook for emerald. His error held until the 1800s, when mineralogists finally identified tourmaline as its own mineral species.
Variations of the name “schorl” may have been used to describe black tourmaline even before 1400. The name comes from a village in Saxony, Germany, (now called Zschorlau) near a mine with black tourmaline deposits.
The Dutch East India Company brought Sri Lankan tourmaline to Europe for centuries before traders realized it was the same mineral as schorl.
American tourmaline deposits caused the gem’s spike in popularity. In 1876, mineralogist George Kunz launched a craze when he sold green tourmaline from Maine to Tiffany & Co.
In the early 1890s, tourmaline was reported in California—where Native Americans had, for centuries, given certain colors of the gem as funeral gifts.
​At that point, China represented the biggest market for tourmaline. The Chinese Empress Dowager Cixi was particularly fond of pink tourmaline, and she purchased large quantities of it from deposits in San Diego County.
The Chinese market was so critical to tourmaline, in fact, that when the Chinese government collapsed in 1912, it took tourmaline trade down with it.
Brazilian tourmaline discoveries in the 1980s and 90s reignited interest in this gem, because material mined in Paraíba displayed such striking neon greens, radiant blues and vivid violets. This region has produced the world’s finest, most valuable specimens of tourmaline—including the world’s largest, weighing 191.87 carats.
While plenty of tourmaline is mined around the world, it’s rare to find fine gem-quality tourmaline in bright colors. This range of material means that the price of tourmaline can vary almost as much as the color.