Ruby, the king of precious gems, is the birthstone for fortunate folks born in July. Symbolic of the passion and energy associated with the color red, the vibrant ruby is said to bring love and success.Find out why ruby is so revered by exploring the history below.

Symbolic of passion, protection and prosperity, the ruby has been revered since ancient times.
Rubies have been particularly prized in Asian countries. Records suggest that rubies were traded along China’s North Silk Road as early as 200 B.C. Chinese noblemen adorned their armor with rubies because they believed the gem would grant protection. They also buried rubies beneath building foundations to secure good fortune.
Ancient Hindus believed they’d be reborn as emperors if they offered rubies to the god Krishna. In Hindu folklore, the glowing fire within rubies burned so hot that they allegedly boiled water. Greek legends similarly claimed that ruby’s warmth could melt wax.
In Burma—a significant ruby source since at least 600 AD—warriors believed that rubies made them invincible. They even implanted rubies into their skin to grant protection in battle.
Many cultures also admired ruby as a symbol of love and passion. Rubies have long been considered the perfect wedding gem.
Though ruby has a long history, it wasn’t recognized as a variety of corundum until 1800. Prior to that, red spinel, tourmaline, and garnet were also believed to be ruby. Even the Black Ruby, one of the famed crown jewels of England, was considered one of the largest cut rubies until determined to be spinel.
Imitation ruby dates back as far as Roman times, though it wasn’t synthesized until the early 1900s.
The red fluorescence power of ruby helped build the first working laser in 1960. Rubies—both natural and synthetic—are still used to make lasers, as well as watches and medical instruments.
After classical Burmese mines depleted, the Mong Hsu region of Myanmar started producing rubies in the 1990s. Though these lacked the rich red hue of traditional Burmese Rubies, they were treated with heat to improve saturation and transparency. Heat treated rubies is a common practice nowadays. 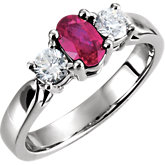