​December’s birthstones offer three ways to fight the winter blues: tanzanite, zircon and turquoise – all of them, appropriately, best known for beautiful shades of blue.
These gems range from the oldest on earth (zircon), to one of the first mined and used in jewelry (turquoise), to one of the most recently discovered (tanzanite).
All of these stones are relatively inexpensive, but their beauty rivals even precious gems. Colorless zircon is a convincing replacement for diamond, tanzanite often substitutes sapphire, and turquoise is unmatched in its hue of robin’s egg blue.
Whatever your style preference or budget, one of December’s three birthstones will match your true blue desires. 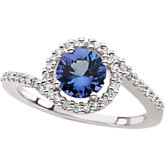 Zircon is the oldest mineral on earth, dating back more than 4.4 billion years. Found in the earth’s crust, it’s common in most sands and sedimentary deposits, as well as metamorphic rocks and crystallized magma.
Due to its chemical makeup, zircon has survived ages of geologic events like erosion and pressure shifts – recording these changes like a time capsule. Zircon contains the radioactive element uranium, which changes the stone’s chemical structure and color over time, giving us important clues about the formation of our planet.
During the Middle Ages, people believed that zircon could induce sound sleep, ward off evil and bring prosperity and wisdom.
Blue zircon, in particular, was popular during Victorian times, and frequently adorned English estate jewelry from the 1880s. Zircon with a cloudy or smoky appearance was also popular in mourning jewelry.
In the 1920s, heat treatment became customary practice to enhance the color of zircon gems for jewelry. Zircon has also been used in the decorative ceramics industry.
Today, zircon is considered a grounding stone that increases confidence and compassion. It is said it can bring visions into reality and provide the guidance needed to achieve goals.
While zircon is popular among gem collectors for its range of colors, consumers seem most enamored with the blue variety, and otherwise confused about the history and possibility of this expansive gem.

Cultures around the world have admired the distinct color of turquoise since ancient times.
The earliest evidence comes from ancient Egyptian tombs, which contain elaborate turquoise jewelry dating back to 3000 BCE. Egyptians set turquoise in gold necklaces and rings, used it as inlay and carved it into scarabs. Most notably, King Tut’s iconic burial mask was extravagantly adorned with turquoise.
The oldest turquoise mines are located in the Sinai Peninsula of Egypt. One sat near an ancient temple dedicated to Hathor, the Greek goddess of love and joy – worshipped as a protector in the desert and as the patron saint of mining. Egyptians called turquoise mefkat, which meant “joy” and “delight.”
Ancient Persians decorated extensively with turquoise, often engraving it with Arabic script. Turquoise covered palace domes because its sky blue color represented heaven. (This later inspired the use of turquoise in buildings like the Taj Mahal.)
Believing turquoise guaranteed protection, Persians adorned their daggers and horses’ bridles with it. Their name for turquoise, pirouzeh, meant “victory.”
Persians wore turquoise jewelry around their necks and in their turbans. They believed it offered protection by changing color to warn of pending doom. (Turquoise can, in fact, fade if exposed to sunlight or solvents.)
When Turkish traders introduced this “Persian blue” stone to Europe via the Silk Road in the 13th century, they influenced the gem’s name. The word turquoise comes from the French pierre tourques for “Turkish stone.”
Meanwhile, pre-Columbian Native Americans mined turquoise throughout the present-day southwestern United States. Shamans used it in sacred ceremonies to commune with the spirit of the sky.
Apache Indians believed that attaching turquoise to bows (and later, firearms) improved a hunter’s accuracy.
Turquoise became valuable in Native American trade, which carried North American material toward South America. Consequently, Aztecs cherished turquoise for its protective power, and used it on ceremonial masks, knives and shields.
The turquoise-studded silver jewelry that’s commonly associated with Native Americans today originated in the 1880s, when a white trader convinced a Navajo craftsman to transform a silver coin into turquoise jewelry.
While many historic turquoise deposits have depleted over the gem’s long lifetime, some small mine operations (mainly in the U.S.) still produce fine material today. 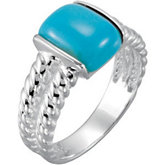