​June is one of only two months that has three birthstones associated with it, giving the lucky people born in June a choice of gemstones between pearl, alexandrite and moonstone.June’s birthstones range from creamy-colored opalescent pearl and moonstone to the rare color-changing alexandrite—one of the most valuable gems on earth. With this spectrum of price points and color options, people with June birthdays can choose a beautiful gemstone to fit any mood or budget.

​The controversial history of alexandrite dates back to Imperial Russia, where it was first discovered in emerald mines near the Tokovaya River in Russia’s Ural Mountains. Its Finnish discoverer initially mistook it for emerald before realizing it changed colors under different light sources.
According to legend, this gemstone was named for Alexander II because it was discovered on the future czar’s birthday in 1834. Because alexandrite’s red and green hues matched Russia’s military colors, it became the official gemstone of Imperial Russia’s Tsardom.
Russian jewelers were fascinated by this rare chameleon-like gem. George Frederick Kunz, the master gemologist at Tiffany & Co., was also fond of it, and produced a series of alexandrite rings between the late 19th and early 20th century. Alexandrite was occasionally used for jewelry in Victorian England, as well.
After Russia’s mine deposits were exhausted, the popularity of alexandrite waned until new supplies were discovered in Brazil in 1987. Brazil, Sri Lanka and East Africa are now the main sources for alexandrite, though these are not as vividly colored as the original Russian stones.
Because it’s so scarcely available, fine quality alexandrite is practically unaffordable to the general public. Even lower quality stones are expensive and limited in supply.
Since the 1960s, labs have grown synthetic alexandrite—not to be confused with simulated alexandrite, which is actually corundum or colored crystals infused with chromium or vanadium for color. Creating synthetic alexandrite is an expensive process, so even lab-grown stones can be costly. 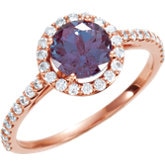 oonstone has been used as a beautiful adornment and a powerful talisman since ancient civilizations. The Romans admired it, believing it was formed from moonbeams. Both the Romans and the Greeks associated moonstone with their lunar deities.
The Roman natural historian, Pliny, coined the name of this gemstone when he wrote that moonstone’s shimmery appearance shifted with the phases of the moon—a belief that held until well after the sixteenth century.
Hindu mythology also told that moonstone was made from the moon’s ethereal light. In India, moonstone is considered a sacred and magical “dream stone” that can bring beautiful dreams at night.
Since ancient times, many cultures have held that moonstone can attune its wearer to the natural rhythms of the moon. Known for its calming, soothing aura, moonstone has been used to treat insomnia and sleepwalking, ward off nightmares and promote vivid dreams.
Often associated with love, passion, and fertility, it is a crystal to nurture new love and rekindle old flames. Also known as the Traveler’s Stone, it can protect travelers at night.
Florida adopted moonstone as its official state gem in 1970 to commemorate the Apollo 11 moon landing and other spaceflights that launched from Florida – even though moonstone is not naturally found in Florida or on the moon.
Valued for centuries, moonstone is still popular and accessible today. It’s the preferred June birthstone, over pearl and alexandrite, in parts of the world like Germany and Scandinavia. 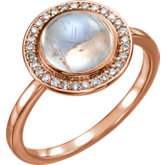 ​Pearls have been used as adornment for centuries —at least as far back as ancient Greece, where they believed pearls were tears of the gods. The oldest known pearl jewelry was discovered in the sarcophagus of a Persian Princess who died in 520 B.C.
Ancient Japanese folktales told that pearls were created from the tears of mythical creatures like mermaids and nymphs. Early Chinese civilizations believed that dragons carried pearls between their teeth, and the dragon must be slain to claim the pearls—which symbolized wisdom.
Other cultures associated pearls with the moon, calling them “teardrops of the moon.” Hindu folklore explained that dewdrops fell from the moon into the sea, and Krishna picked one for his daughter on her wedding day.
Because natural pearls were so rare throughout history, only the richest echelon could afford them. During the Byzantine Empire, rules dictated that only the emperor was allowed to wear these treasured gemstones. Ancient Egyptians were often buried with their prized pearls.
Tudor England was known as the Pearl Age because of the stone’s popularity with the upper class during the sixteenth century. Portraits showed royals wearing pearl jewelry and clothing adorned with pearls.
Pearls became more accessible in the early 1900s when the first commercial culturing of saltwater pearls began in Asia. Since the 1920s, cultured pearls have almost completely replaced natural pearls in the market—making this classic gemstone affordable for nearly any budget. 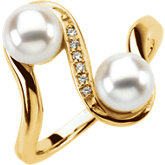