​May birthdays fall right in the heart of spring, and the emerald is the perfect gem to symbolize and celebrate this month. Prized for its brilliant and beautiful green color, the emerald is often favored by the rich and famous to wear as statement pieces for big events.But this beautiful gem is just at home in an unassuming pendant as it is in an ornate tiara.

The emerald was mined in Egypt as early as 330 BC, but some estimate that the oldest emeralds are 2.97 billion years old.
Cleopatra is perhaps the most famous historical figure to cherish emeralds. She even claimed ownership of all emerald mines in Egypt during her reign.
The Egyptians used emeralds both in jewelry, and in their elaborate burials, often burying emeralds with monarchs as symbols of protection.
On the other side of the world, the Muzo Indians of Colombia had well-hidden and prized emerald mines. These mines were so hidden, it took the Spanish conquistadors nearly twenty years to find them.


Like other gemstones, the emerald was believed to have many mystical powers that accompanied its beauty. There were those who thought the emerald could cure stomach problems, control epilepsy and stop bleeding. Maybe due to its soothing green color, it was also thought to be able to ward off panic and keep the wearer relaxed and serene.
Today, emerald is a symbol of loyalty, new beginnings, peace and security, making it not only a beautiful gem to wear, but also a meaningful gift to be treasured by the receiver. It is still widely prized by the rich and famous, with Elizabeth Taylor’s famous emerald pendant selling for $6.5 million in 2011.
​ 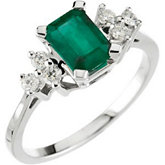