​We have a birthday present for those born in August: the stunning spinel has been added to your month’s birthstone lineup! August now joins June and December as the only months represented by three gems.The original birthstone for August was Sardonyx, and then peridot was added, becoming August’s primary gem. Now spinel adds its multitude of color choices!

​Peridot jewelry dates back as far as the second millennium BC. These ancient Egyptian gems came from deposits on a small volcanic island in the Red Sea called Topazios, now known as St. John’s Island or Zabargad.
Ancient Egyptians called peridot the “gem of the sun,” believing it protected its wearer from terrors of the night. Egyptian priests believed that it harnessed the power of nature, and used goblets encrusted with it to commune with their nature gods.
Some historians believe that Cleopatra’s famed emerald collection may have actually been peridot. Through medieval times, people continued to confuse these two green gems. The 200-carat gems adorning one of the shrines in Germany’s Cologne Cathedral were long believed to be emeralds as well, but they are also peridots.
This gemstone saw a revival in the 1990s when new deposits were discovered in Pakistan, producing some of the finest peridots ever found. Some of these “Kashmir peridots” measured more than 100 carats.
The most productive peridot deposit in the world is located on the San Carlos Apache Indian Reservation in Arizona. An estimated 80 to 95 percent of the world’s peridot supply is found here.
Thanks to these rich deposits, the modern demand for peridots can now be met easily, giving people born in August affordable options for wearing this beautiful green birthstone. 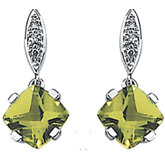 ​The spinel is often assumed to be other gemstones because it tends to resemble either a ruby or sapphire. In fact, some of the most famous rubies in history have turned out to be spinel. But its distinguishing features, like its octahedral crystal structure and single refraction, are what sets it apart from other gems. Spinel also has a lower Mohs hardness than ruby and sapphire.
Significant deposits of spinel have been found in Cambodia, Myanmar, Sri Lanka, and Thailand. It has also been found in Afghanistan, Australia, Brazil, Madagascar, Nepal, Nigeria, Tadzhikistan, Tanzania and the U.S.
Vivid red is the most desirable color of spinel gemstones, followed by cobalt blue, bright pink and bright orange. The more affordable stones are often those with paler colors, like lavender. You may also find spinel in black, violet blue, greenish blue, grayish, pale pink, mauve, yellow or brown. So many choices!
When shopping for spinel, a good quality stone should have no visible inclusions. The more inclusions, the less valuable the stone. Spinel can be found in various cuts, like octagons, trillions, squares, rounds and fancy shapes, like ovals, pears, and cushions. 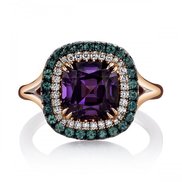