​September’s birthstone is the sapphire—a precious gem of wisdom, loyalty and nobility. This stone is said to focus the mind, encourage self-discipline and channel higher powers.When people say “sapphire,” they’re usually referring to the royal blue variety of this gem, although it can occur in all colors of the rainbow (except red, which is classified as ruby instead).
This lovely gem gives September-born babies a full spectrum of options when choosing the shade of birthstone that best represents them.

​September’s birthstone, the sapphire, has been popular since the Middle Ages. Back then, the celestial blue color of this gem symbolized heaven and attracted divine favor and wise judgment.
Greeks wore sapphire for guidance when seeking answers from the oracle. Buddhists believed it brought spiritual enlightenment, and Hindus used it during worship. Early Christian kings cherished sapphire’s powers of protection by using it in ecclesiastical rings.
Ancient Hebrews believed that the Ten Commandments were engraved on tablets of sapphire, though historians now believe the blue stone referenced in the Bible may have been lapis lazuli.
Classical violet-blue sapphires traditionally came from the Kashmir region of India between the late 19th and early 20th centuries. The world record price-per-carat for sapphire was set by a gem from Kashmir, which sold at auction for $242,000 per carat (more than $6.74 million total) in October 2015.
Famous star sapphires like the 1404.49-carat Star of Adam, the 563.4-carat Star of India and the 182-carat Star of Bombay came from Sri Lankan mines.
Australia was a significant source of sapphires until deposits were discovered in Madagascar during the 1990s. Madagascar now leads the world in sapphire production.
In 1902, French chemist Auguste Verneuil developed a process to make synthetic sapphire. The abundance of synthetic sapphire unlocked industrial applications spanning integrated circuits, satellite communication systems, high-durability windows and scientific instruments.
This gem became a symbol of royal love in 1981 when Britain’s Prince Charles gave Lady Diana a 12-carat blue sapphire engagement ring. Prince William later gave this ring to Catherine Middleton when he proposed in 2010.
Today, top-quality blue sapphire remains one of Mother Nature's rare gems. 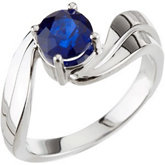